It’s usually many of our client’s inner fantasy, and a popular topic of water fountain gossip pre/post class – what’s it like to own a barre studio? It doesn’t have to be a pipe dream – you can harness your passion for fitness and go for it yourself! If you’ve been curious about doing the same, we’re picking the brain of NEIGHBORHOOD barre Memphis studio owner, Ashley Averwater. Ashley’s here to spill the beans on a (real talk) day in the life of an owner, the road to opening your own studio, and her number one piece of advice to know if you’re ready to take the plunge. 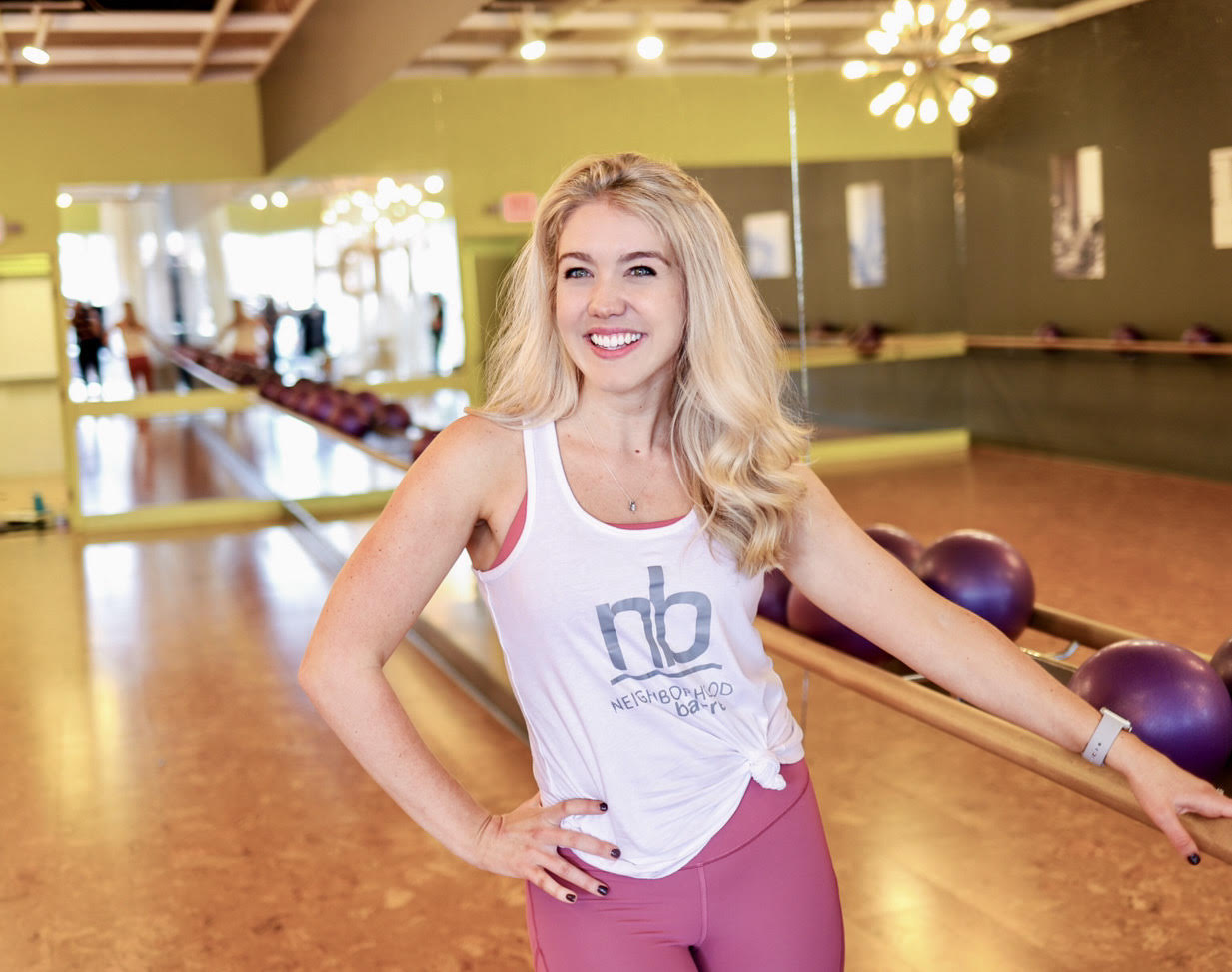 Have you always been into fitness, or is it something you came into as an adult?
“My background is actually in performing arts. I have always been a vocalist and an actress. In college, I was a vocal performance major and stumbled into the idea of competing in the Miss America program for scholarship money, since they had a talent category. Once I won my first preliminary title, I knew that I needed to get serious about health and fitness if I was going to do well at the highly competitive Miss Tennessee pageant.
To my surprise, winning that competition was the moment that would change the course of my life forever. I never played any sports growing up or had any guidance on how to eat healthy. So when I started moving my body and paying attention to the kinds of food I was eating, it really made me come alive and feel better than I had ever felt in my life. I tried several fitness programs to specifically help me to lean out and tone my body for the swimsuit competition. Once I found NEIGHBORHOOD barre, my search ended. I was hooked after my very first class! It felt so good to finally find a fitness program that worked and that I legitimately looked forward to doing. Working out was no longer a chore, but something that made me truly happy, all thanks to Nb!” 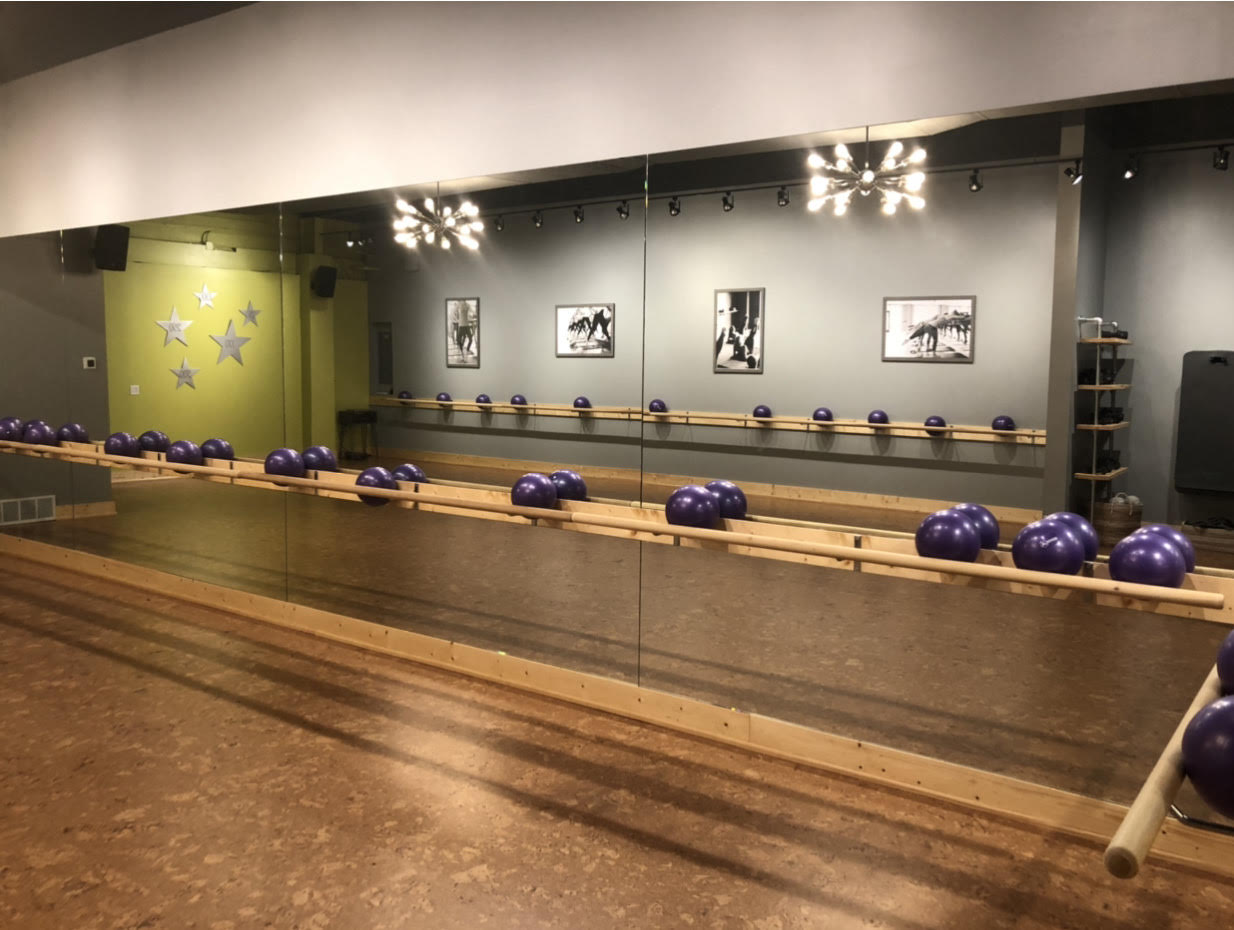 What was it about NEIGHBORHOOD barre that made you want to become a franchise owner? And why now?
“The NEIGHBORHOOD barre brand is just special! Everything from the music played in classes, to the vibe of the studio, to the brand colors and style. Something about walking into a Nb studio makes you want to strive to be better, yet makes you feel accepted just as you are all at the same time. I wanted to be a part of bringing that experience to Memphis.
Shortly after falling in love with NEIGHBORHOOD barre, I had to move across the state to Memphis with my then fiancé and now husband. I was very sad to leave The Nb Knoxville studio behind, but I was also excited because I had found a new passion and knew that I wanted to be a barre instructor. The thought had crossed my mind to open a NEIGHBORHOOD barre in Memphis, but it seemed much too scary and daunting given I didn’t have any business experience. I went on and earned my group fitness certification, in addition to several barre certifications, and got a job instructing barre at a local church. I taught 7 classes a week for 6 years straight and not once dreaded going to work or felt my passion for barre dwindle. With every year that passed, however, I felt my desire to open a studio grow more and more, until I finally just knew that it was something I had to try or I would regret it for the rest of my life.” 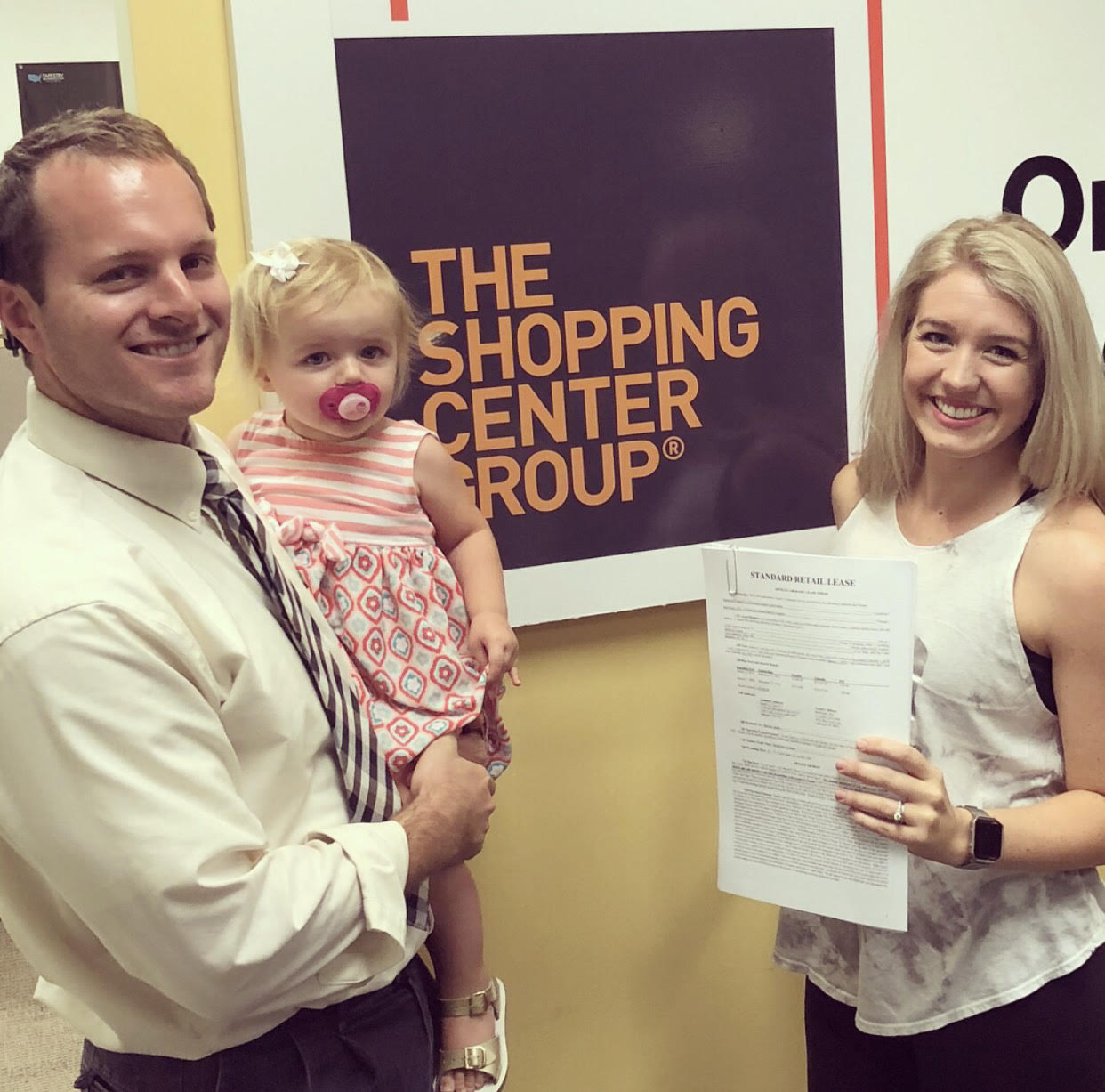 What was your biggest hesitation about taking the leap to open a studio?
“There were definitely hesitations when taking such a big leap into ownership. One of the biggest obstacles I felt was the lack of business experience that I had, and another huge one was the fact that I knew I wanted to be a mother. I wasn’t quite sure how the role of business owner and mother would go hand in hand. But after I had my daughter, Presley, in 2016, the idea never left my heart. It was then that I knew I wanted to set the example for her that if you work hard enough, you can make all of your dreams come true. It is certainly challenging at times to juggle. But it’s also something that the two of us can share, as she accompanies me to the studio regularly and has become good buddies with our clients and the children who frequent our childcare room. Not a day goes by that I am not so glad that I followed my heart despite the obstacles and hesitations. It was well worth it!”
What does a day in the life look like of a studio owner?
“My schedule is different from week to week, which I love! I tend to get bored or restless when I get stuck in a pattern or routine, so it’s perfect for me. Everyday jobs are answering phone calls, emails, and direct messages on social media. I am usually physically at the studio four to five days of the week teaching or taking my instructor’s classes. Two days of the week, I schedule my office hours at home. I use that time to work on growing the business and developing plans for the studio, while my daughter is at school and my husband is at work. Of course, I always have to stay flexible as plans can change, but I like it that way!” 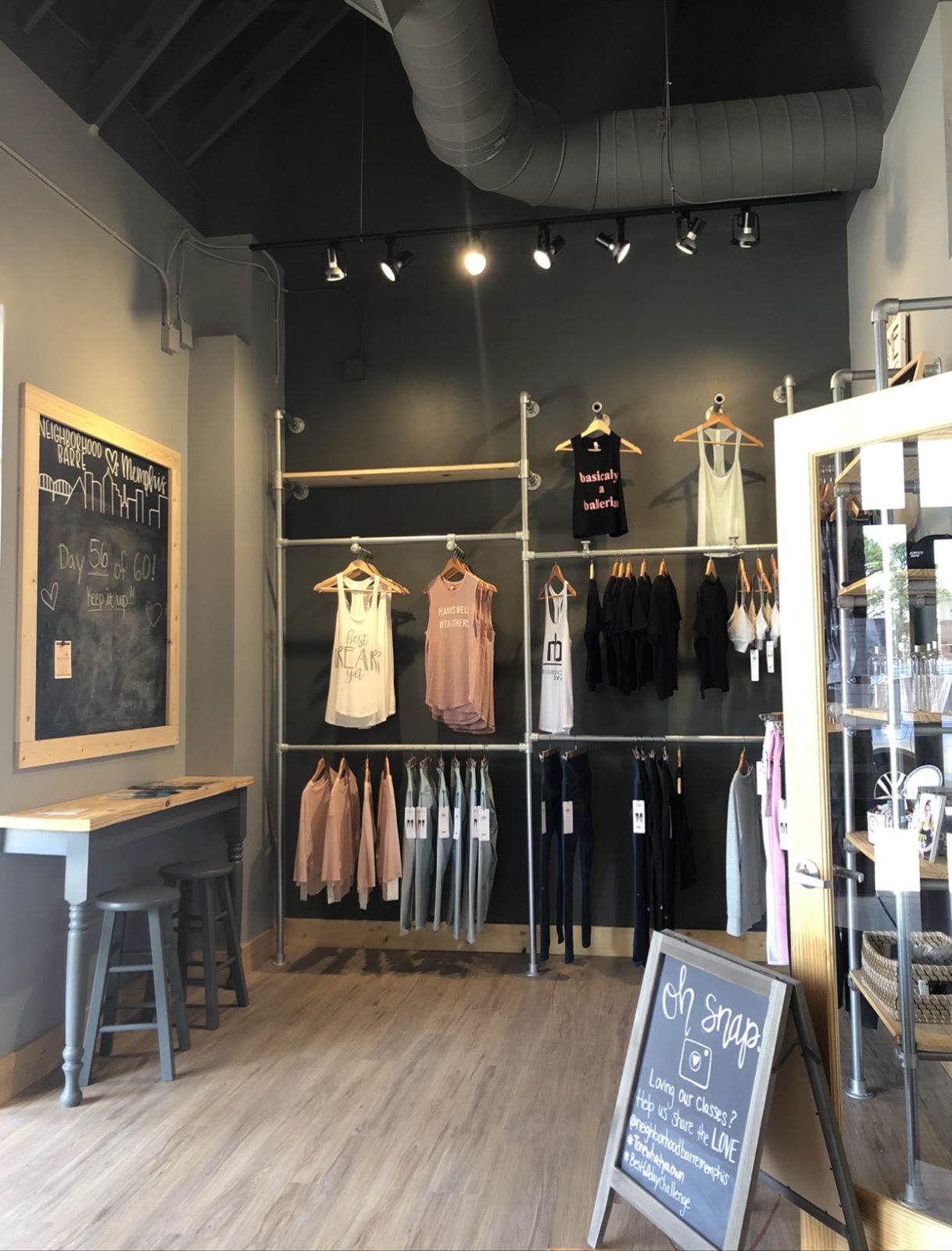 What’s been some of the client feedback about NEIGHBORHOOD barre, your studio, and the community since opening in Memphis?
“It has been extremely positive! The compliments we get time and time again from clients of all ages and fitness levels have been how welcoming and warm the studio is, as well as how encouraging and helpful our instructors are. There have been several instances of women personally thanking me for bringing NEIGHBORHOOD barre to Memphis because it has changed their lives. They talk about how they have seen and felt their bodies transform, and how it has given them confidence that they have never experienced before. For me, these are the most magical moments when I hear those words, because NEIGHBORHOOD barre has changed my life twice now. Once when I was introduced as a client, and then again when I chose to become an owner. I beam with joy to know that by choosing to bring NEIGHBORHOOD barre to Memphis, I am helping to change others’ lives as well. It has all come full circle and my heart is so full!”
What’s your biggest piece of advice for someone considering opening a Neighborhood Barre studio, or business?
“This is a tough one! There are lots of little things I could share from lessons I have learned along the way, but I suppose the biggest piece of advice would be to follow your instincts. Prior to signing on the dotted line, I was SO scared. I remember going to visit a NEIGHBORHOOD barre studio with my husband to meet our founder, Katy, and being open and honest about my fears. She told me that she would genuinely be worried if I wasn’t scared of taking on my own studio. That was the moment that helped me make my decision. It made me realize that every great owner was afraid at some point, but instead of letting fear make their big decisions for them, they used it as a tool to drive them and the success of their studio. Just know that ownership IS big, it IS challenging at times, and it is definitely not a decision that should be taken lightly. But, if you have done your due diligence on the matter, you have a business plan, and you LOVE serving people, don’t let fear stop you from following your instincts about being an owner!”